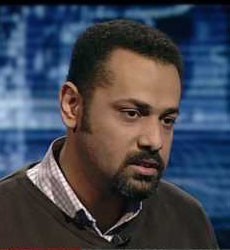 He became widely known after he broadcasted on his blog page at Misr Digital (Egyptian Awareness)several videos of police brutality, and reported an incident of mob harassment of women.

This got the attention of the media, and led to the conviction of police for torture.


In 2007, Wael Abbas won a journalism award by the International Center for Journalists. He had previously won the Egyptians Against Corruption Award for 2005/2006. He was considered as one of the most influential people in 2006 by BBC. In 2008, he also won the Human Rights Watch's Hellman/Hammett Award .

on February 4th 2011, a day that witnesses mass protests in Tahrir Square (well over 2 million people)asking the end of Hosni Mubarak's regime, Wael Abbas was announced missing. It seems he could have been arrested.

Help us improve this page:   Correct or update the Wael Abbas page