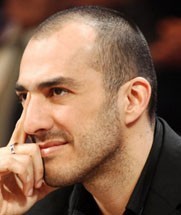 Wadih Abi Raad is a holder of several opera degrees in Bulgaria and Italy. He held many opera concerts in Bulgaria, Italy, France, Dubai and Beirut. In October 2003, he won the Special encouragement prize 2003 awarded by Raina KABAIVANSKA FOUNDATION in Bulgaria. His technical experiences are related to big names and titles such as: Haydn, Mozart and local music plays with the Rahbany’s.

Wadih Abi Raad stood in the face of his younger brother when he wanted to join the Star Academy, the case created a buzz in the Lebanese and arab media, especially when Wadih brother talked about the inside secrets of Star Academy.

Help us improve this page:   Correct or update the Wadih Abi Raad page