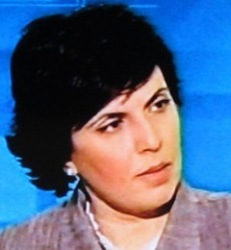 Vera Yacoubian is an Armenian-Lebanese researcher, author, and socio-political activist. Her mother is of Syrian descent.

Vera Yacoubian, also spelled Vera Yakoubian, is the Executive Director of the Armenian National Committee in the Middle East. She often takes part in conferences and televised dialogues pertaining to the Armenian cause.

Vera graduated from the Lebanese University with a degree in mass communication, and has worked as an adviser to the Lebanese youth minister before joining the Beirut-based Armenian committee, which was formed in 2005. Yacoubian's mission as she puts it is to spread awareness of the Armenian identity and history.

Help us improve this page:   Correct or update the Vera Yacoubian page

This Article was prepared by fanoos.com
All copyrights are reserved to the Author of the Article