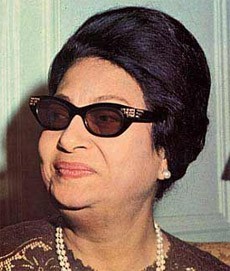 Um Kulthum is a legendary female Arab singer from Egypt. Oum Koulthoum's real name is Fatma Ibrahim El Beltagi, she was born on the 4th of May 1904, and died on the 3rd of February 1975.

You will find her name in many forms, including Oum Kalsoum, Om Koltoum, Oum Kulthoom, Umm Kulthum, Om Kolthoum, Om Kalsoum, Oumme Kalsoom or even Umm Kulsoom. In Turkish her name is ÜmmÜ GÜlsÜm.

Um Kulthum was not only a singer but also a song writer and a talented actress. She was known as Kawkab El Sharq which means the Planet of the Orient.

So many years after her death, Om Kolsom is still by far the most recognizable names in Arab Tarab singing. She is also considered as one of the worlds most famous and distinguished singers of the twentieth century.

In 2001, the famous Lebanese DJ Said Murad gives Oum Kalsoum a fresh rebirth by introducing techno-driven mixes of her famous tunes. The whole world then rediscovers this Egyptian Icon under a new and much youthful angle.

CONTROVERSY:
Oum Kalthoum is believed to have lived her life as a lesbian; this shouldn’t be subject to controversy in a different context, but given she has a near-mythical status even among young Egyptians and Arabs today, and that she comes from a VERY conservative country, this is often seen as an offensive matter.
Another controversial issue was the rumors that circulated after the death of Asmahan (sister of Farid El Atrache) a tough competitor to the legacy of Oum Kalthoum. She was said to have the most beautiful voice in the Arab World and was showered with positive and admirative reviews, something that Oum Kalthum could not tolerate. After Asmahan had a car accident, the blaming fingers went pointing in the direction of Star of the East Kawkab el-Sharq! This is very similar to what can be witnessed in modern days between the two rivals on the Middle Eastern pop scene, Hayfa Wehbeh and Rola Saad…

Help us improve this page:   Correct or update the Um Kulthum page