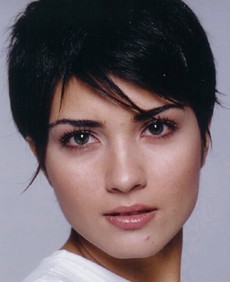 Her name in turkish is writtern as Tuba Büyüküstün.

Tuba Buyukustun was born on the 15th of July 1982 in Istanbul, Tuirkey.

Tuba Buyukustun graduated from the Dogus Science High School, following that she studied at the department of the decoration of stage and costume at the Mimar Sinan University.

In the year 2004 she became very popular with the series Cemberimde Gul Oya. She played the role of Zarife, the series was under the direction of Cagan Irmak.

In 2004, Tuba Buyukustun took leading a role opposite Sevket Coruh and Yetkin Dikinciler in the TV movie Gulizar.

Help us improve this page:   Correct or update the Tuba Buyukustun page