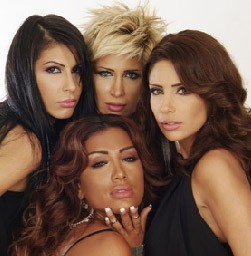 In 1997, Ghassan Rahbani came up with the idea to form a group of 4 female singers due to the fact that the Arab world lacked such a kind of bands.

After a long and hard time searching for the perfect girls, he finally sets his choice on 4 members for the group, relying on their talent in entertainment, and beauty. (Though he also explained that the girls voices were great)

Except for Dalida Chammai, the other 3 members kept being substituted by new faces, as old members left the group either to pursue solo careers or because of family related issues. Some of the previous 4 cats members included Maya Diab, Nicole Saba, Rola Bahnam, Nisrine Zreik.

Most of the 4Cats songs were originally composed by Elias Rahbani, but re-arranged in a modern funky format by Gassan Rahbani. The face lift was done in a manner which would meed the taste of the new younger generations.

Their casual simplicity, their international sexy western looks, combined with the great Rahbani songs, gave them a unique style and distinguished them from all other Arab singers and groups.

After doing a gig in Cairo on New Year’s Eve 1998-1999, they traveled throughout the Arab World to perform in concerts and entertain the crowds. They even made it to the United Kingdom.

Their first album "TIC-TICK", released in mid 1998, sold more than one million copies in the Arab world and stayed as number one in the Arabic top charts for more than four months.


Two other video clips were made from the first album "YA NASSINI and KAN EL-ZAMAN", which were also very big hits.

Their second album "LAYL NHAR" was released in the mid. 2000. The video clip "LAYL NHAR", music and lyrics by Gassan Rahbani, the choreography and dance were made by "Kimberley Morrow" one of the best dancers who appeared in Will Smith?s hit video clip "WILD WILD WEST". Kim was brought especially from the States in order to train the 4 Cats for three new songs.

In November 2000, they released their second clip from the same album "MABAA’ IYDA" (music and lyrics by Gassan).

Their third album "Tal Intizari" was released in early 2002.
Two video clips were shot from this album:
The first one was "Tal Intizari" shot in Dubai as a duet with Gassan, who also composed the song and wrote the lyrics.
The second clip was "Rah Hibak Aa Toul" (music & lyrics by Jad Rahbani).

Their forth album called "YA ANTAR" was a successful hit, with its main song "Aameli Antar" shot as a muic video. They also shot the song "MECHE ETTOFNISS".

In early 2011, the group was dissolved after Maya left the group, and Dalida became busy with her family.

Help us improve this page:   Correct or update the The 4 Cats page