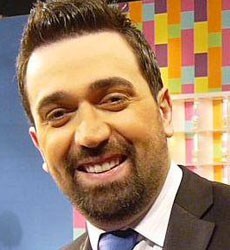 Tarek Soueid is a Lebanese Tv host and actor.

After acting in a few TV series , Tarek only made a breakthrough in television with La2la2a on Orange Television - OTV , a gossip program he hosts with Lebanese actress May Sahab. The show initially invited D-list celebrities, before gradually gaining popularity and taking off with more prominent names.

Tarek also works as a writer for many TV shows like nataloooo and la2la2a itself, and wrote the script of series like "Nefra7 Mennak" (in which he poorly portrayed a stereotypical gay character), Nouhad w Sou3ad (a big hit on Lebanese television featuring two old maidens), and Metel el Kezeb.

*Movies Tarek has appeared in:
- A7ebbini - Written by Marwan Najjar

Help us improve this page:   Correct or update the Tarek Soueid page