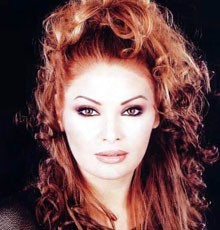 Susan Tamim also known as Suzan Tameem is a Lebanese singer with a beautiful voice and attractive face.

Susan Tamim was born on the 23rd of September 1977 in beirut, Lebanon.

Susan Tamim graduated from the Studio El Fan TV Show in 1996. Susan was characterized by the presence of beautiful and form the most beautiful, beautiful voice and beautiful Professional life began issuing Songs singel any songs alone without Albums With it is against this method is regarded as Aandalmt this thing and that he was discriminated against in that period And

Susan Tamim moved away from the art industry for a long time, where she spent time in Paris.

Suzan Tamim was first married to Ali Al Mouzannar, they got a divorce in the year 2002.

In this same year (2002) Susan tamim came back with an album entitled (Saken Albi) which means inhabitant of my heart.

However her second marriage had its ups and downs as well, later Adel Matouk prevented Susan Tamim from leaving her home country Lebanon.

After that Susan moved from Lebanon to France, then from france to Egypt, and spend the last 8 months of her life in Dubai, where she was murdered in a mysterious way.

Maptlahz was another hit song for Susan.

Help us improve this page:   Correct or update the Susan Tamim page