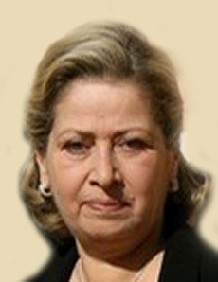 Solange Gemayel is a famous political female Lebanese figure and a former First Lady of Lebanon.

Her original name was Solange Tutunji, Solange Gemayel founded the Bashir Gemayel Foundation, in order to keep his name alive.

Solange married Bachir in the year 1977. They have a daughter named Maya, who was born in 1978. However Maya died in a car bomb intended for her father.

Solange and Bachir had a second daughter named Youmna Gemayel, who was born in 1980, They also have a son, Nadim Gemayel, born in 1982, few months Bachir got killed.

Solange Gemayel opposed the presence and interference of Syria in Lebanon. Solange is a pro Western, she was a critic at many demonstrations against the Syrian regime in Lebanon, after the assassination of former Prime Minister Rafik Hariri.

Help us improve this page:   Correct or update the Solange Gemayel page