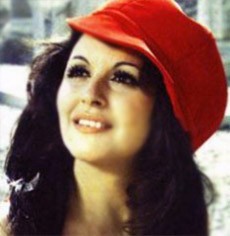 Souad was a famous and pretty actress from Egypt, but she also had some Syrian family roots. Souad grew up in a large family made of seventeen siblings, and was the tenth daughter.

Souad Hosni was nicknamed The Cinderella of Egyptian movies. Soad Hosny is by far one of the most popular actresses in the Arab film history.

Hosni began her career as an artist by singing Sister of the Moon, during a popular radio program for children called Baba Sharo.

A family friend, Abd El-Rahman El-Khamissy, a writer and a director, discovered her acting talent and asked Ibrahim Saafan, an Arabic teacher at the time, who later became a comedy actor, to give her oral performance lessons. Abd El-Rahman was screening for the film ‘Hassan We Na'ima', and wanted to present Soad as his new discovery in the role of Na'ima. The film was produced and directed by Henry Barakat.

Her final screen appearance was in the 1991 film The Shepherd and the Women, directed by her ex-husband Ali Badrakhan.


Some of her famous works include:
Wedding Night
A Womans Affairs
Hassan We Na'ima
The Shepherd and the Women
Him and Her a television series with Ahmed Zaki
Stranger
Watch out for Zouzou

Soad Hosny died on June 21, 2001 in unclear circumstances. She was found on the sidewalk below the building in which she was living; she had fallen from the balcony of her apartment. Although suicide was the reason officials gave, many believed she was pushed to her death. Hosny was suffering from an unknown illness for more than five years, and had to move to London to seek a treatment.

More recently and after the downfall of President Hosni Mubarak's regime, her sister Najat Hosni announced the family will submit a new complaint to the Attorney General accusing certain officials of a state-sanctioned killing of her sister .. She also indicated that they have a lot of information, which could not previously be revealed, and confirms that did not commit suicide, as some have tried to claim!

Previously, the heirs of Soad Hosni had decided to close the file, after the court rejected the re-autopsy of Soad Hosni, under the pretext of the existence of fallacies in the technical reports and forensic conducted by the British authorities over the death of the late actress in London.
She said at the time that the fractures in the skull of Soad Hosni, and other injuries, are not consistent with the claims of just falling from the balcony of a house .. Which may affect the nature of the incident and turns to suspicion of a criminal act, but the court rejected the lawsuit .. Causing despair among the heirs that chose to close the case. But today, after the fall of the regime, the heirs decided to reopen the file again after this new information is available about the involvement of figures in the former regime in the killing of Soad Hosni .. As they knew that Souad had intended to publish memoir exposes the key figures in the order and rule!

Help us improve this page:   Correct or update the Soad Hosny page