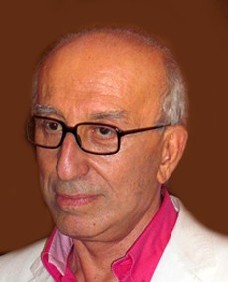 Simon Asmar is a producer of variety Television programs and shows and and impresario.

His career official started in 1972, when he created a talent search TV program which discovered many singers and artists who shaped the Arab music industry for many years.

Simon Asmar talent show which is known as Studio El Fann aired, on Tele Liban, then aired for many years on the Lebanese Broadcasting Corporation - LBC and finally moved to Murr Television - MTV Lebanon in 2009.

In addition to Studio El Fan, Simon Asmar experience spans to over 50 years. He directed and produced Gameshows such as Bab El Haz, El Denyeh Doulab. He worked with talented presenters such as Riad Sharara, Mireille Mazraani and Ziad Njiem.

He was Head of Variety Department, to Head of Public Relations, to Member of Programming Board, and alongside, Producer and Director in more than a Radio Channel, and Head of Programming and Marketing in one of the Leading Radio Stations in Lebanon in the Eighties.

As an Impresario, Simon Asmar managed, planned, and created the image of many of Lebanese and Arab Stars. His management, was a controversial topic and his exclusive contract was often critisezed as being very strict. However many of the stars who were under his wing found their way to stardom. Stars like Nawal El Zoghby, Wael Kfoury, Fares Karam and others.

As an entrepreneur, Asmar built the Studio ElFan Company, to manage the Careers of his young protégés. In the late nineties he built Nahr el Funun - Restaurant and Cabaret. Which served as the playground and lab for the new talents. He experimented, tested and shaped those who are ready to become Stars.

Simon Asmar has been awarded many recognitions from local, regional and international organizations, Clubs and Festivals.

In the early years of 2000s, He launched his own son Bachir Asmar as a television and videoclip director, to follow in his path and help shape the future of his business.


Help us improve this page:   Correct or update the Simon Asmar page