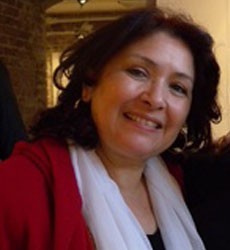 Sihem Bensedrine is a journalist, activist and the
founder & spokesperson of the National Council for Liberties in Tunisia (CNLT).

Sihem Bensedrine, also written Siham Bin Sedrine or Siham BenSedrine, was born on October the 28th, 1950 at La Marsa-Tunisia. She studied in France at the University of Toulouse, where she received a degree in philosophy.

Sihem Ben Sedrine is actually dubbed the "Iron Lady of the Tunisian opposition." On June 26th 2001, she was arrested at the airport in Tunis upon her return from London. She had participated in a program on Arabic TV channel Al-Mustaquilla (the Independent) an Arabic TV channel based in London, in which she had criticized the corruption within the family of President Zine El Abidine Ben Ali. After two months of incarceration, she was released from prison. After that, she became an iconic figure among the Tunisian population.


In 1998, Sihem Bensedrine founded the National Council for Liberties or Conseil National pour les Libertés en Tunisie (CNLT), of which she became the primary spokesperson.


Sihem Bensedrine is the editor of Kalima, an independent Tunisian newspaper published on the Web. She also worked in the opposition newspaper El Mawkif, was editor-in-chief of Gazette Touristique and founded l'Hebdo Touristique.


Sihem Bensedrine is an energetic human rights activist and was also part of the Committee for the liberation of Florence Aubenas, a correspondent in Baghdad. In 2004, Bensedrine was honored with an International Press Freedom Award by Canadian Journalists for Free Expression. In 2008, Bensedrine also received The Danish Peace Fund Prize for her efforts in organizing a network among Arab human rights activists.

Sihem Bensedrine was nominated for the Arab Revolution Women Award.

Help us improve this page:   Correct or update the Sihem Bensedrine page