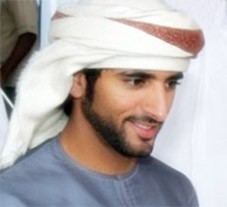 Sheikh Hamdan began his schooling in Dubai at the Rashid Private School and then continued his studies in the United Kingdom where he graduated from Sandhurst and the London School of Economics.

Sheikh Hamdan Al Maktoum is nicknamed Fazza or Fazza3. It’s his artistic pseudonym, as he is also an author and usually publishes his poems under this name. Fazza3 also refers to someone who initiates in helping others and supporting them, something that Hamdan would like to be known for.

Aside from Arabic Poetry, Fazza3 also loves horseback riding; He won the gold medal in Equestiran at the Asian Games.

Sheikh Hamdan bin Mohammed bin Rashid al Maktoum was elected by Forbes as one of the 20 Hottest Young Royals in the world.

Fazza was for long considered as the Sexiest Arabian Prince, but he became the official holder of this very title after ranking 18th on the first and only Top 100 Sexiest Arab Men 2010 list.