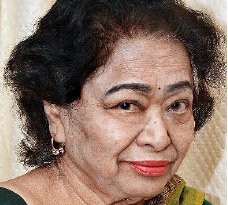 Shakuntala Devi is a Mathematical genius, calculating and numbers prodigy who was born on the 4th of November 1939 in Bangalore India.

Shakuntala Devi father worked in a circus as a human cannon-ball. She demonstrated her first miracle in number calculations gifts at the age of 3 when she was playing card tricks with her father.

When Shakuntala Devi was six years old she demonstrated her calculation and memorization abilities at the University of Mysore. At the age of eight she had success at Annamalai University by doing the same.

Other calculating prodigies, such as Truman Henry Safford, lost the calculating abilities during adulthood. However Shakuntala Devi has all her powers even after 60. In the year 1977 she extracted the 23rd root of a 201 digit number mentally, which is an amzing thing.

On the 18th of June 1980 Shakuntala Devi multiplied one 13 digit number by another 13 digit number in 28 seconds. The two number were randomly selected by the Computer Department of Imperial College London.

Shakuntala Devi answered the question to the multiplication in just 28 seconds. Keeping in mind the number of seconds it take to dictate the answer which is a 26 digit number, which leaves less seconds for mental calculation time. This event is mentioned in the 1995 Guinness Book of World Records.

In the year 2006 Shakuntala Devi released In the Wonderland of Numbers , a book with Orient Paperbacks which talks about a girl Neha and her dreams for numbers.

Shakuntala Devi gave a demonstration at the University of Rome and she proved that the machine was wrong and she was correct.

Also on BBC, Shakuntala Devi challenged the interviewer within seconds on hearing the problem, and explained to him how the problem was worked out wrong.

Shakuntala Devi can tell the exact day of the week of any date, month, and year from the past to the present and the future dates as well.

Help us improve this page:   Correct or update the Shakuntala Devi page