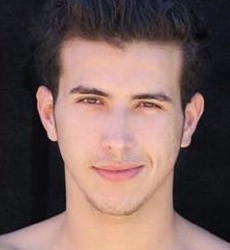 Shakir Badar is the very first Mister Gay Morocco in History, and most probably in the Arab World.

Shakir Badar from Tangier is Mr. Gay Morocco 2006-2007, and represented his country in the International Mr Gay competition which was held in Palm Springs. Forty young men from 40 different nations took part in the contest, which is essentially the gay version of Miss World.

Shakir Badar who was very proud to be the first Mr. Morocco explained: "I want to participate in this competition because I’m proud of who I am and I’m prepared to show this to the rest" and that "I think this will become a unique experience for me which I will never forget".

(It is not clear though, as apparently there was a previous one from Casablanca; still he was marketed as such and became the most popular one. If you have any information about this please let us know)

To note that while tourists are not at risk, Article 489 of the Moroccan Penal Code still may still hand down a maximum three year prison sentence to Morocco's gay inhabitants.

Help us improve this page:   Correct or update the Shakir Badar page