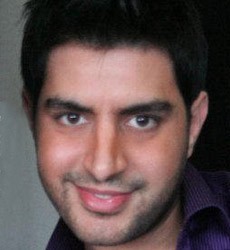 Serge Asmar was born on 04 May 1986 in Minyara Akkar, but grew up in Jbeil. He studied directing (Audiovisuelle).

Like most young presenters who first seem inappropriate for professional channels with a large audience, Serge started working in smaller shows on Tele Lumiere, then found his way to Al Jaras Television (like Rodolph Hilal,Raja Nasser Eldine,etc...). He however got the largest exposure on Orange Television - OTV. He presented a small section on a talk show hosted by Robert Frangieh, in which he reported celebrity gossip and small news.

Serge then started appearing on the morning show Yawm Jdid in special reports WHAT'S UP? on Sundays with top 5 Arabic songs and similar news.

Help us improve this page:   Correct or update the Serge Asmar page