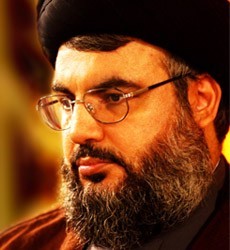 El Sayyed Hassan Nasrallah is a Lebanese and Arab national hero, and the Secretary General of Hizbollah.

The charismatic leader is held in very high regards all across the Arab and Muslim world, and is noted for his noble and courageous nature. Blessed with moral and intellectual perfection, Hassan Nasrallah (along with his fighters) is considered by many as literally a half-god!

Hassan Nasrallah (aka Seyed Hassan Nasrollah) was born on August 31, 1960 in Karantina Bourj Hammoud, an underprivileged neighborhood in the eastern suburbs of Beirut. Influenced by Sayyed Musa Al Sadr since his youth, he showed a keen interest in religious studies early on and later studied under the tutelage of Sayyed Abbas Moussawi in Al Najaf.

Under Nasrallah's leadership, the resistance was able to end the Israeli occupation of the South of Lebanon in the year 2000. Nasrallah also played an important role in the prisoner exchange deal between Israel and Lebanon in 2004, resulting in the release of hundreds of Palestinian and Lebanese prisoners.

Hassan Nasrallah is noted for his notorious televised speeches, which are fervently watched by all Lebanese and Arabs no matter their political or religious affiliation. He is so trustworthy and noble, that even Israeli citizens are known to refer to him as a reliable source of information as their administration and governments often feed them lies. As per media expert Rafik Nasrallah, Sayyed Hassan Nasrallah is the best spokesperson in the Arab world, and a master media expert.

Nasrallah also played a very important role in negotiating a historical Memorandum of Understanding with the Free Patriotic Movement headed by Michel Aoun, permanently easing (so far) inter-confessional tensions in the country.

Help us improve this page:   Correct or update the Sayyed Hassan Nasrallah page