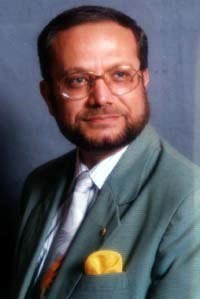 Samir is the brother of Famous Lebanese singer Ronza and Amal Tomb.

Samir Tomb has written more than 13 books about astrology and parapsychology.

In 1978 he wrote in "Samar magazine" published by Dar Al Sayad the first article in the Arab world concerning the interpretation of the personality through graphology.

In 1989 he graduated in parapsychology and astrology from the University of Banco, in France (Deauville). In 1992 he established in Lebanon two offices for astrological consultation.

He prepares a program about the signs of the zodiac in a morning show called "Sabahou" broadcasted by Lebanon Television at 11:15.

In 1993 he began a morning program that was prepared and presented by him that lasted for four years on Future T.V .

Specialist in parapsychology and astrology from the University of Banco in France (Deauville).

Member of the International Association of French speaking Astrologists (France) Counsellor of the greatest Arab politicians and artists.

"One consultation can change your destiny" is the motto of Dr. Samir Tomb Office

Where do you stand on parapsychology in your emotional, professional, social and hygienic life?

Dr Samir Tomb offers you the chance to know yourself and the others so that you become relaxed and you face life with great confidence. He relies on the seventh sense and the rational thinking to read your mind and your problems through:

*Chiromancy (the past, the present and the future).
*Western, Chinese, Arab and Indian astrology.
*Physiognomy and graphology.
*Numerology and Geomancy
* Hydromancy
*Treatment of obsession and anxiety, exorcism of black magic, envy and spiritual impurity by means of talismans and observation of minerals and precious stones.
*Crystal ball
*Analysis of the human personality.

Help us improve this page:   Correct or update the Samir Tomb page