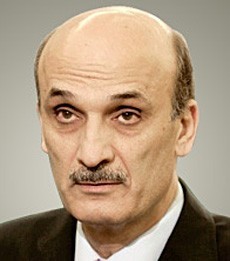 Samir Geagea is a Lebanese politician and the leader of the Lebanese Forces - LF political party.

His full name is Samir Farid Geagea. He was born on the 25th of October 1952.

Samir Geagea is a prominent personality in the March 14 Alliance, with leading figures such as Saad Hariri and Amine Gemayel.

In the year 1986, Geagea became the leader of the Lebanese Forces. Following the Lebanese civil war, he allied with Syria initially to vanquish his opponents especially in the Christian clan.On October 13, 1990 - Geagea's Lebanese Forces militia backed the Syrian army attacks on the Lebanese Presidential Palace and the Defense Ministry with artillery support. The Syrian troops took over the area and committed massacres against the surrendering Lebanese Army troops and civilians. Geagea's militia celebrated the fall of Lebanon and its army to the Syrians all night with gun shots and fireworks. Geagea's Lebanese Forces militia killed prominent Christian leader Dany Chamoun with his wife and two children (ages 5 and 7) after the Syrians completely occupied the capital Beirut.

Samir Geagea is a notorious Christian warlord, who was involved in numerous war crimes and unethical behavior. Even Christians who refused to submit were violently dealt with. Although he was not the only one to have taken part in the Lebanese civil war, this image still follows him today despite his efforts to cleanse himself from his bloody past.
In June 13, 1978, Samir Geagea led an attack against Tony Frangieh, then a prominent Christian leader of North Lebanon, at his summer family house. Frangieh was killed along with dozens of his supporters.
In September 1982, the Lebanese Forces militia, of which Geagea was a rising member, participated in massacres against Palestinian refugees in camps in Beirut.

Around 1986-1987, Geagea's militia buried nuclear and chemical wastes on Lebanese territories in exchange for millions of dollars: An Italian company called Jelly Wax, had payed them to store the toxic products in Lebanon, including in a quarry near Beirut that once held 16,000 barrels and 20 containers of heavy metals, toxic pesticides, and other deadly chemicals. Other companies from Germany, Canada, and Belgium, also secretly delivered toxic chemicals to other parts of Lebanon. Mr. Pierre Malychef, one of Lebanon's most respected environmental scientists, was then asked to test the sites and hand in a report . He was later beaten up by unknown tugs, and jailed for a week for allegedly giving false testimonies. The Lebanese Army later attempted to remove the wastes and export them back to their source.

In 1986, the Maronite Catholic Monseigneur Khreish was kidnapped, tortured and killed for criticizing the acts of the Lebanese Forces militia.

In the year 1994, four years after the end of the Lebanese War, Geagea was arrested for being behind four political assassinations, including the assassination of Rashid Karami, a former Lebanese Prime Minister in 1987.

He was also charged for an attempted assassination of Defense Minister Michel Murr in 1991 which was unsuccessful.

Samir Geagea denied all charges, but was found guilty and got sentenced to four death sentences, each of which was later reduced to life sentence.

Geagea was imprisoned in solitary confinement below the Lebanese Ministry of Defense building in Beirut for eleven years.

It is worth mentioning that Samir was the only Lebanese militia leader which got imprisoned for crimes committed during the Civil War in Lebanon.

After the Cedar Revolution, and after the Syrian regime was pulled out of Lebanon, the New Lebanese Parliament voted to forgive Samir Geagea and release him, He got released on the 18th of July 2005.

Geagea and the party he represents LF (The Lebanese Forces) is the main Christian part of the March 14 Alliance.

In the month of September 2008, Samir Geagea apologized in public to thousands of supporters in Jounieh, his speech came as follows:

"I fully apologize for all the mistakes that we committed when we were carrying out our national duties during past civil war years,... I ask God to forgive, and so I ask the people whom we hurt in the past."

On the International stage, Samir Geagea is refreshing his relations with the United States and France.

Samir Geagea had a talk with French president Jacques Chirac in the Élysée Palace on the 19th of March 2007.

Geagea met with Secretary of State Condoleezza Rice, NSA Stephen Hadley and the chairman of the Foreign Affairs Subcommittee at the White House, in the year 2008, The talk was focused around the Middle East.

Help us improve this page:   Correct or update the Samir Geagea page