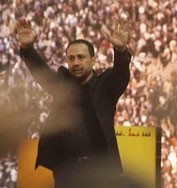 Sami Shehab is a member of the Lebanese Resistance movement Hezbollah.

Sami Shehab, also spelled Sami Chehab, was a political detainee in Egypt, held by the corrupt Hosni Mubarak regime. A sham tribunal attempted to legally convict him but failed. Still he he was put in prison for nearly two years before escaping on February 3 2011, during the Egyptian revolution.

Sami Chehab made a surprise appearance on February 16,as he took to the stage at the rally by Hizbollah in a southern suburb of Beirut to mark the group's martyrs' day. He was received as a national hero.

Help us improve this page:   Correct or update the Sami Shehab page