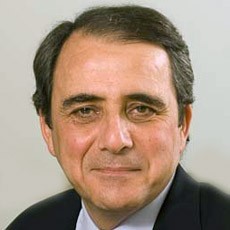 Sami Haddad is a former minister of economy and trade in Lebanon.

Sami Haddad was born on the 26th of August 1950, In the year 1971 Haddad received a degree in Ecoomics from the American University of Beirut.

In 1977 Sami Haddad received his Master's degree in the same university.

Sami Haddad is married to Hanan Fakhoury, the couple has two children.

Between the years 1979 and 1981 Sami Haddad worked an assistant to the governor of the Banque du Liban.

Then later Haddad started working at the World Bank Group until he became a minister of economy and trade in the month of July 2005.

Help us improve this page:   Correct or update the Sami Haddad page