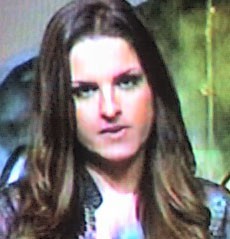 Samantha Sayegh started her career as a karaoke singer, winning many international awards.

Samantha Sayegh later took part in the talent show Ghani Ma3 Ghassan in its first season (2008) on Orange Television - OTV, and won first prize in occidental song. As a result, Ghassan Rahbani offered her the single Go Now Go, which he composed and wrote himself.

Samantha Sayegh mostly sings in English and has a very powerful voice. She hits all notes with ease and perfection. She is sometimes called the Lebanese Celine Dion.

Help us improve this page:   Correct or update the Samantha Sayegh page