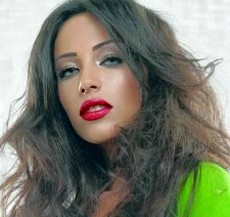 Sally Njeim is a Lebanese female Model and singer. Her first Music Video clip was for her hit song Bala Ahbab which was directed by Bachir Asmar.

Sally Njeim is very beautiful, she still has no official album released.

Sally Njeim seems to be very popular on the internet; her photos and songs get downloaded quite frequently.

Help us improve this page:   Correct or update the Sally Njeim page