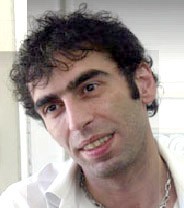 In 1938 Said traveled to Yugoslavia to study at the University Film Academy of Belgrade.

In 1990 Said moved to Germany to continue his education at Drjsseldrof. He graduated in the year 1992.

Said worked as a freelancer, as a first assistant director plus editor and camera man in short films with different German directors, and made during these years 5 video clips for 5 German bands.

During 1996 to 1999 Said El Marook worked as a freelancer for German and Arab TV stations in music and sports fields, such as Cannes festival, the world football cup - France 1998, and expo Lisboan 1993, in addition to many commercial films like Phlipis, B.M.W.]

Also worked as a freelancer on various projects i.e. Director of reportages and the Holland Belgium Europe Football cup 2000.

Between the years 1997 and 2000, Said worked as a Director in live musical concerts for Foreign stars in France, Germany, Italy, Denmark, Belgium, Holand and few more.

2001: Best Music Video For the Foreign video clip, on Khad Harir clip made for Ramy Ayach.

Help us improve this page:   Correct or update the Said El Marouk page