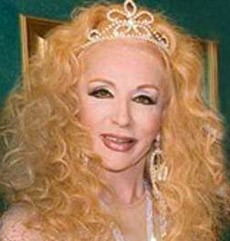 Sabah was born in 1927 in in Beirut, Lebanon. Sabah true name is Janet Feghali also known as Al Shahroura Sabah is a Lebanese Singer and Actress whose fame spread all over the arab and western world. Her fame started from the mid 1940s to this day.

Janet Fighali (Janet Feghali) was her true name but soon she was better known as Sabah.

Sabah was born in Beirut, however some old records show that her birth place is the village of Wadi Shahrour.

Sabah singing career started as early as 1940. Her first appearance was in Egyptian movies in which she used to act, sing and dance.

Sabah has released more than 50 albums and has acted in 86 movies, as well as almost 20 stage plays.

Sabah name is among the most prolific Arabic-language singers, with a reported 3,500 songs. Her name goes along side Fairuz and Wadih El Safi. Sabah and her work contiues to make her an Icon of both an old and a future generation.

Still a prominent performer in her late 80s, she continues to perform both in concert and on television, including such programs as Lebanon's Star Academy (the Arabic equivalent of the United Kingdom's Fame Academy) where she sang her new single on a stage lined with mannequins displaying costumes from several of her early films and musical plays.

The singer is known to fans by the diminutive "Sabbouha" and is also called "Al Shahroura," or the singing bird.

In 2005, she released a new Dance single titled Shoo Feeha Al Diny (What's in the world?). Her 2006 release, Yana Yana, a duet with Lebanese singer Rola, is a remake of a 1960s hit. The accompanying video, in which Sabah is shown as "the notorious diva" to whom her younger colleague pays tribute, has received wide play on Arabic music channels.

Sabah has been married ten times, most recently to the 22-year old Amr Mihio ("Mr. Lebanon") in 2003. The relationship did not last, and in 2004 she admitted that it had been a stunt to catapult Amr, who was starting his acting career, into the spotlight. Other former spouses are Naguib Shammas, Anwar Mansy, composer Baligh Hamdy, Egyptian television presenter Ahmed Farrag, Rushdy Abaza (to whom she was married for three days in 1967), Joe Hammoud, Wassim Tabbara, and Fadi Lubnan.

She has two children, Sabah Shammas (by Naguib Shammas) and actress Hewayeda Mansy (by Anwar Mansy), who live in the United States.

Sabah in Movies and Films

Many of Sabah's movies have not been released commercially on either VHS tape or DVD. Movies she has acted in include:

Sabah Passing Away
Sabbah was bedridden for few months, before she passed away quietly in the morning of Wednesday 26th November 2014.

Help us improve this page:   Correct or update the Sabah page