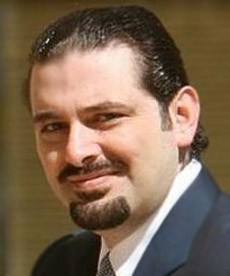 Saad Hariri is a Lebanese/Saudi politician and former Prime Minister of Lebanon.

Saad Hariri was born on the 18th of April 1970. He holds a dual nationality, Lebanese and Saudi (he uses the Saudi passport in all his travels). His father is the assassinated former Lebanese Prime Minister and Rafiq Hariri.

Saad Hariri inherited the wealth, power, media and the Future Movement which was founded by his father Rafic Hariri. He is also the Leader of Movement of the Future since 2005.

Saad Hariri is the leader of March 14 Alliance, a group of political Lebanese parties. Lead by Michel Aoun's supporters, the group was able to push the Syrians out of Lebanon in what was called the Cedar Revolution 2005.

Saad rode the momentum, but gradually lost a lot of his allies. He played a major role in the false witnesses’ conspiracy that tried to involve Syria and ' March 8' in former PM Rafik Hariri’s murder.

On 12 January 2011, and following the collapse of his cabinet, Najib Mikati was handed the mission of creating a new government. Saad Hariri had been prime minister since 9 November 2009.

Help us improve this page:   Correct or update the Saad Hariri page