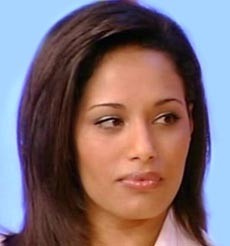 Rula Jebreal is a Palestinian journalist and author.

Rula Jebreal was born on the 24th of April 1973 in Haifa, Palestine. She is the daughter of a guard who worked at the Al-Aqsa Mosque. Jebreal was raised in Jerusalem, and completed her education at the College of Dar At Tifel where she graduated in 1991.

In 1993, Jebreal obtained a scholarship from the Italian Government for foreign students of medicine and moved to Bologna, where she tried in vain to join the entourage of medical Virtus Bologna as a physiotherapist.

In 1997, she began working with Il Resto del Carlino, Il Giorno and La Nation, where she worked on town news and social issues in 1999, with particular attention to the Middle East conflict.


In 2004, Rula Jebreal started her daily talk show, Ominibus. She interviewed celebrities from Italy, Palestine, Israel, and Europe. During her show she interviewed Silvio Berlusconi, ex prime minister and Massimo D’Alema, the president of the Parliament.

In February 2006, she opposed the Vice-President of the Senate and Reforms Minister Roberto Calderoli of the Berlusconi government, a leading figure of the Northern League, after their statements on immigrants released during a public rally. They responded by calling Jebreal "that tanned lady ", in reference to the color of her skin. Trade associations and various political forces condemned the expression used by the minister.

In June 2007, she became the editor and host of Anomalous Wave, a weekly broadcast on foreign satellite channel Rainews24.

Publishing house Rizzoli has published two novels of Rula Jebreal revolving around the Arab conflict: The way the flowers of Miral (2004) and Bride of Aswan (2005).

Rula Jebreal had lived and worked in Italy for more than 12 years, before she moved to Cairo, to work at Al Kahera Wal Nas Television Station, Cairo Centric.

In November 2010, Rula Jebreal released a novel entitled Miral. The novel is about the story of Hind Husseini, a young woman from an aristocratic family, who enters the life of 55 children who were left crying and lost near the Damascus Gate in the Old City of Jerusalem. The story takes place at the beginning of the war in 1948. She was received on the set of numerous TV talk shows in the USA as a results, and her book was turned into a movie.

Help us improve this page:   Correct or update the Rula Jebreal page