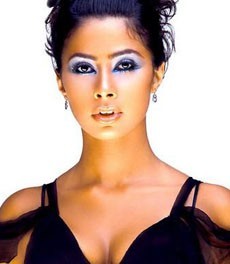 Ruby is an Egyptian pop singer and actress.

Rania El Hussein, better known as Rouby or Ruby was born on October 8th, 1981 in Egypt. Ruby caused a lot of stir early on with her controversial music videos, including Enta Aref Leih that was directed by Egyptian director Sherif Sabri. Ruby was also enlisted in Top 100 Sexiest Arab Women 2010.

Murielle Romanoff, a Polish singer, spotted Ruby in front of the American University in Cairo. He found in her the Arabic beauty he was looking for. After chosing Roubi to appear in his music video for a song called Don't Make Me Cry. Soon After Roubi started her modeling career. later on, Rouby worked in television commercials for many products, and that gave her face exposure to the crowd, who loved her.

In the year 2001, Roubi played the role of a romantic rich girl who falls in love with her driver, a nice film called Soukoot Hansawsar, that was directed by famous film director, Youssef Chahine.

Early in 2003, Rouby appeared as a professional singer with her first videoclip Enta Arref Leih. The song was composed by the famous Egyptian composer, Mohammad Rahim. The videoclip was directed by Sherif Sabri. In the videoclip Roubi appears to be wandering in the streets of Prague, she dances and sings. The clip soon became a big hit on music stations in the Arab world during 2003.

However this same video, caused a huge stir in the media. many traditional arabic people and music critics disapproved the way Rouby sang and danced in a provocative way.

Early 2004, Rouby shocked the world with a second video for a new song entitled (Leih Beydary Keda). One more time this video was directed by Sherif Sabri. This new video implied many sexual messages and dances through the video, which caused even more stir in the media. The final shots of the clip were very spontanous and simple, showing Roubi putting some make-up. How she got stylists in Beirut, recording songs with Mohammad Rahim and Sherif Sabri.

Kol Lmma Aoloh Ahh is the title of Roubi's third videoclip, the clip shows some scenes from Rouby's movie, Saba3 Waraat Kotchina (7 Playing Cards) which contained some explicit scenes and which was directed by Sharif Sabri.

(7 Playing Cards) movie was censored in Egypt. Due to its sexual content, many other arab countries simply decided to ban the movie all together. The movie the first experience in cinema for video director Sharif Sabri, many critics said that the story of the movie was very weak.

Ana Omry Mastaneat Hadd and Ghawy were the other videoclips of Roubi, which were released later on. Both clip shots were one more time taken from the movie (7 Playing Cards).

Ebaa Abelni music video is another clip which Rouby shot later in the 2005. The video storyboard runs around an ancient Egyptian dancing seductively and playing with a snake. The video was directed by Shereef Sabri.

Ever since she started Rouby was supported my Melody Hits TV. The channel always broadcasted the premier of Ruby's videos which seems to result as a kind of a prior agreement that was set between Sharif Sabri, Rouby and the owners of Melody Hits TV Station.

Ruby was studying Law in Cairo University, but then devoted herself to becoming an established artist. Rouby has decided later to focus on her studies so she can at least gain a university degree.

Many rumors say that Roubi has some Moroccan roots, but Rouby denied this. She was also rumored to be married to her mentor, Sherif Sabri but both Roubi and Sharif denied such information.

Rouby is preparing for her next song entitled Tahet el Douch (under the shower). The media in the arab world have gone wild thinking of how the clip will be shot. Sherif Sabry will not reveal any information about the upcoming clip, but he promised something new and different.

Help us improve this page:   Correct or update the Ruby page