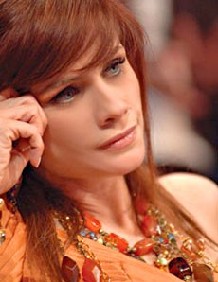 Roula Saad is the President of Star Academy since its launch in season 1 till season 6. Roula Saad sometimes is mistaken by the famous Lebanese singer Rola Saad.

Roula Saad personality might be the primary incentive for her taking the tough challenge of being the president of the Academy. She herself said that she lives for challenges. Another incentive for taking such a challenge is her highly distinguished long experience in the field of television as the head of the promotion department at the Lebanese Broadcasting Corporation - LBC.

Roula has worked on almost all the promotional video clips which were produced on the occasion of the annual anniversary of LBC Internation Television.

Roula Saad works long and repeated hours on the ground with the teachers to select the best applicants from the Arab world.

Rola Saad works with the teachers during the course of Star Academy to make sure that the students achieve the dreams they long for.

Help us improve this page:   Correct or update the Roula Saad page