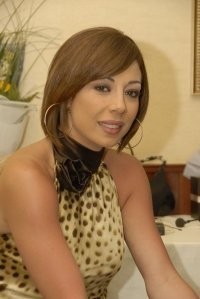 Roula Chamieh is a Lebanese actress and comedian.

Roula Chamieh joined the cast of in S.L.CHI in 1994, alongside Nathalie Naoum, Adel Karam, Fadi Reaidi and Naim Halawi. The famous Lebanese comedy series ran for several years on Murr Television - MTV Lebanon. In the last seasons, Roula Chamieh sexed up her image, and underwent a few plastic surgeries.

In the year 2003, Roula Chamieh joined the cast of La Youmal in 2003 which played on Future Television.

Roula Chamieh was mostly famous for role as Sousou Dakhilo. Lebanese Director Nasser Fakih says that Roula is an outstanding actress who can play different roles and characters.

Roula Chamieh hosted many live shows on TV including Telob Wetmana, Layali Ramadan and El-Khazna on both Murr Television and Future TV.

Help us improve this page:   Correct or update the Roula Chamieh page