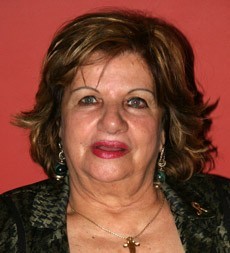 Rosalie was born in Dfoun - Aley. She got married in her early teens (around 14), and emigrated to the United States of America. There, she studied fortune telling and palmistry with experts in the domain. Although she learned the craft, Rosalie credits her talent to intuition and innate abilities. At first, she had to hide her gift from her strict traditional husband, who would not tolerate such behavior. Rosalie later returned to Lebanon, where she settled down for good in Dekwaneh.

After impressing her friends and neighbors with her talent in coffee cup reading, word of mouth brought desperate crowds flocking at her front door from all walks of life: famous personalities, politicians, singers, and even men of cloth! People came from everywhere, asking her to predict their fortune, reveal their hidden secrets, foresee their good luck and business success...

Rosalie likes to be called Oum Walid, in memory of her son who passed away at a young age. Rosalie's daughter, Helene Maalouf, is also a famous fortune teller. In what seems like a creepy coincidence, they are both widows and claim to have predicted the death of their husbands. Fortune-telling is apparently not the only thing that runs in the family! This could however be just a marketing tool for extra sensationalism!

Rosalie Tabet Abi Aad claims that she can tell your future by simply looking into the palm of your hand, and reading the lines or paths. She has also published a few books, including Summary of Horoscopes, Dreams & Fortune Telling.

For more thrilling details about Rosalie, make sure to check Oum Walid the fortune teller; Fanoos had an exclusive interview with her to discover the hidden secrets of her talent!