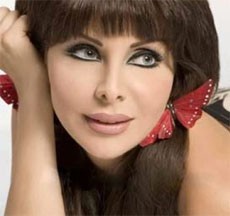 Rola Saad is a model and Arabic pop singer from Lebanon.


Rola Youssef Saad started her career as a model, then later on decided to venture into singing after former model Haifa Wehbe's breakthrough into the song industry.

Rola ranked #8 on the list of Sexiest and Most Desirable Arab Women for 2009. She dropped a few positions the following year and came 21st in Top 100 Sexiest Arab Women 2010.

She first appeared in a music video for one of her earliest songs "Leih Teamel Keda", an electro pop track heavily inspired by one of Amr Diab's songs. The video has mysteriously disappeared from circulation ever since.
In 2004, Rola released that same track in her first album "Ala Da El Hal" produced by Alam El Phan, followed by several singles including: "Ala Da El Hal", "Leh Te3mal Keda" and "Amot Wa Shouf". Rola's first songs had a synth-pop feel, far more interesting than her later work which seemed to conform to a shabi style.

It was only until 2006 however, thanks to a duo with legendary Lebanese singer Sabah, that Rola Saad really made it on the Arabic pop scene. "Yana-Yana" was a remake of a famous song from Sabah's rich repertoire. They released together a music video that became widely showcased on most Arabic TV channels. The duet was such a great success, that Rola went for a similar collaboration in "Dal3oua". Rola Saad also released her second album "Kol Al Gharam", produced by Melody Music, which contained these singles in addition to hit songs such as "Sehrohom" and "3an Eznak Ya M3alem".

Rola then had her first experience as an actress in an Egyptian movie called Al Ghourfa 707, which was released in 2008.


Rola Saad was recently featured in the FFIFA World Cup 2010 official song "Wherever You Go", alongside international stars such as Awadi from Senegal, AFace from Nigeria, Beni Global from Uganda, Samini from Ghana, Krotal from Cameroun, Slikour Kwest and Josi from South Africa, and Kelly Rowland from the USA.

Rola Saad is most commonly known for her rivalry and Cat-fight quarrels with Haifa Wehbe.

Rola Saad (alongside journalist Nidal Al Ahmadieh) was accused by Haifa Wehbe of circulating a false amateur movie on mobile phones, in which Haifa appears to be engaging in indecent activities. No one was able to prove whether the woman in the movie was actually Haifa or someone who just looked like her.

After the accident Haifa had while shooting one of her videos involving an aircraft scene, Rola Saad was accused of paying the driver of the airplane to crash into the car that Haifa Wehbe was driving during the video shoot. The rumors said that Rola allegedly paid the airplane’s driver $600,000!

Help us improve this page:   Correct or update the Rola Saad page