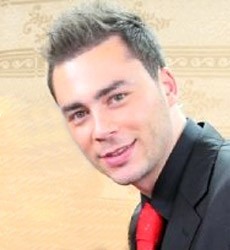 Rodolph Hilal is a Lebanese TV presenter and radio anchor.

Rodolph worked as a model and shot promotions for several companies, before becoming part of the cast of Dardachat Program on "Zen TV".

Rodolph Hilal then found his way to Al Jaras Television, where he became the TV host of many shows including 'Ma3 Rodoplh'. He also works as a radio anchor on Jaras Scope.

Help us improve this page:   Correct or update the Rodolph Hilal page