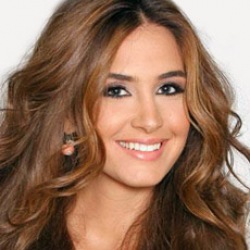 Miss Lebanon 2012 ceremony took place on the evening of Saturday 29th September 2012 at Platea theater in Jounieh, Lebanon. The ceremony was under the patronage of the Ministry of Tourism and was organized by LBCI.

Rina Chibany was born in Zahle in the year 1991. She was crowned Miss Lebanon 2012. Rina will represent Lebanon at the 2012 Miss Universe competition.

Rina Chibany and Romy Chibany are twin sisters. They are 21 years old.

Her figure statistics are 34-25-37 inches and her hobbies include reading and swimming.

Rina was chosen among sixteen beautiful women from Lebanon aged between eighteen and twenty-four years old.

Her twin sister Romy, obtained her BA in nutrition and general health from the same university.

Help us improve this page:   Correct or update the Rina Chibany page