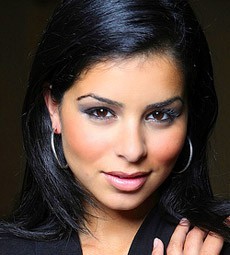 Rima Fakih is a famous Lebanese American Beauty who was crowned as Miss USA 2010. Rima lives in Dearborn, Michigan.

Rima Fakih was born on the 2nd of October 1986 in Lebanon. During the month of Sept 2009, Rima won the Miss Michigan Pageant title and during May 2010, She was crowned as Miss USA pageant.

She is the first Miss Michigan to win the Miss USA title since Kenya Moore in 1993. She is also the second Miss USA of Arab-American descent after Julie Hayek in 1983 who was also a Lebanese-American.

As a young girl, Rima got raised in Queens, New York, where she studied at a Catholic school. In the year 2003, She moved with her parents to Dearborn, Michigan. Rima Fakih holds degrees in economics and business management from the University of Michigan Dearborn. After completing her 12 months reign as a Miss USA Pageant, she is planning to attend law school.

Rima Fakih is of Shite Muslim religion, however her family practice both Muslim and Christian religions.

Rima Fakih is said to be the second Arab American to win the title of Miss USA and the first Muslim American in the world to hold that title.

On the 15th of May 2016, Rima Fakih got married to music producer Wassim Salibi. The Wedding hosted many celebrities including Hayfa Wehbeh and Moroccan/American Rapper Karim Kharbouch known for his stage name French Montana.

Help us improve this page:   Correct or update the Rima Fakih page