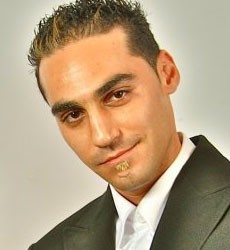 Richard Savo is a musician/ composer from Palestine, and one half of the group Electrowavez.

Richard Savo was born on April the 7th 1982 in Akka (Acre) Palestine. At the age of 10, he started playing the piano, which gradually led him towards his first music experiences as a rapper.

In 1999, Richard Savo along with two of his friends, started one of the first Arabic rap bands called 'MWR'.

Savo went on to compose, score and produce a series of original sound tracks like for for a 15 hour historical drama 'The God Stories', a film project that took him to Morocco and then Holland where he lived for a while.

In Holland, Richard Savo further advanced his interest in mixing eastern and western styles of music. The Clubbing and Dance Scene there, inspired him to use his skills in experimenting with electronic music. He rounded out his experience with formal studies in Sound Design and Synthesis.

Angelina Zbedat's vocals are often featured on their tracks.

Help us improve this page:   Correct or update the Richard Savo page