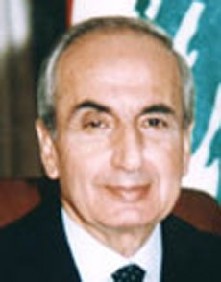 René Moawad also known as Rene mouawad is a former Lebanese President who held his post for seventeen days before he got killed.

René Moawad was born on the 17th of April 1925 in Zgharta, North Lebanon.

He was assassinated on the 22nd of November 1989, He got killed 17 days after he got the post.

His son Michel Moawad grew up on the footsteps of his father, backed by the political power of his mother and his fathers legacy.

He was elected for the Lebanese Presidency on the 5th of November 1989.

While it is believed that pro-Syrian forces were behind the assassination, no results came out of the investigations.

Help us improve this page:   Correct or update the Rene Moawad page