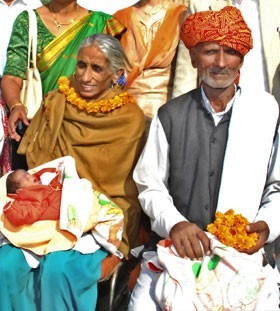 Rajo Devi is an indian woman and oldest woman to become a mother at the age of 70. Rajo Devi delivered her baby girl on the 28th of November 2008 using a vitro fertilization also known as an IVF treatment. The operation took place at a Hisar fertility centre in India. Its good to note that Rajo Devi reached her menopause at the age of fifty.


Adriana Iliescu was the oldest woman to have given birth as she got her baby at the age of 66 in the year 2006.
Maria Del from Spain gave birth using the IVF method at the age of 67.
Currently Rajo Devi has become the oldest mom in the world.

The doctors had to avoid multiple pregnancies, so they used blastocyst culture, in such a case a single potential embryo is transferred to the uterus only. Doctors were afraid that having a twins would have had put Rajo's life at risk, because of her age.


Help us improve this page:   Correct or update the Rajo Devi page