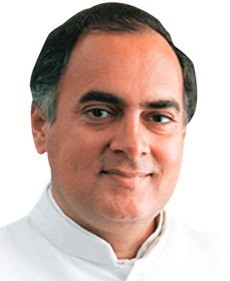 Rajiv Gandhi was the nineth Prime Minister of India. Rajiv Gandhi is the elder son of Indira and Feroze Gandhi.

Rajiv was the youngest Prime Minister of India , he was elected in position when he was forty years old.

Before Rajiv Gandhi joined the politics, He was a professional pilot in the Indian Airlines.

Help us improve this page:   Correct or update the Rajeev Gandhi page