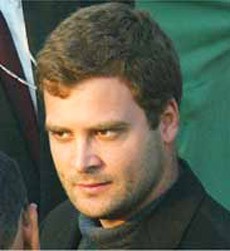 Rahul Gandhi Indian politician and member of the Parliament of India.

Rahul Gandhi was born on the 19th of June 1970 in India, he was born to a Nehru Gandhi family. His family is one of India's most prominent political families in India.

His political party is the Indian National Congress.

Rahul Gandhi is an activist, he asks for building connections to rural India and trying to democratize the hierarchical Congress party.

In the end of May 2009 Rahul Gandhi news about him being a Gay icon as many Gays and Lesbians in India voted for his favor.

Help us improve this page:   Correct or update the Rahul Gandhi page