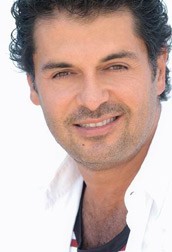 Ragheb Alamah has three sisters and four brothers. He is the youngest of the boys. Ragheb father named his son after the name of first Lebanese Judge, Ragheb beik Alama.

Ragheb is a renowned star and one of the most famous in the arab world. His fame success and music career spans to over 25 years.

Ragheb Started singing back in the 1980s, with famous songs like Mayjouz, El Hidieh, and many others.

In the new millennium, Ragheb alameh came back with a great duo entitled Betgheeb betrouh with singer Elissa.

In the year 2006, Ragheb Alamah was invited to participate in the pro-celebrity Formula One race which was held in Bahrain.

Although the Superstar had never experienced such an event, his passion for driving and determination for success made him win Third Place overall.

Ragheb Alameh is preparing for his 2007 album, which is to be released in late summer 2007, most probably holding the title Ihsas Ghareeb (Strange Feeling).

Help us improve this page:   Correct or update the Ragheb Alameh page