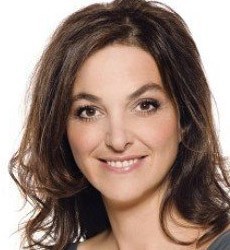 Peri Cochin is a Lebanese TV presenter and producer from France.

Born Périhane Chalabi in Beirut on May 28, 1965, she grew up in Tyre, and left for France in 1975 when the Lebanese civil war started. To note that she has Iraqi ancestry.
In Paris, Péri married French architect Guillaume Cochin, and became known as such.

Péri Cochin became mostly popular on TV as one of the regular guest columnists/critic or co-hosts in “On a tout essayé” (We tried it all), a famous French TV show presented by the eccentric gay host Laurent Ruquier on France 2. This show was adapted into a Lebanese Program on Murr Television - MTV Lebanon called "Men El Ekhir" hosted by Pierre Rabbat. Incidentally, this is actually the new career path of Péri Cochin; In 2003, she establishes the Production House Périscoop, specialized in adaptations of French TV shows for the Arab world such as "Chakou Makou" with Neshan , "Adam wa Awa", "Taratata" and the most popular of all "Talk of the Town" presented by Mona Abou Hamzeh.

In June 2011, Péri Cochin entered a legal struggle with Al Jadeed TV because of a show hosted by Rabia Zayat that apparently was a bit similar to one she owned copyrights for. She won the lawsuit and forced Rabia to change the concept of her show. The rapidity of the court's judgment (something quite unusual in Lebanon) reinforced the prevailing sentiment that this was all orchestrated to shut off all the tough competition MTV was facing and remedy the losses in ratings the station was incurring.

Help us improve this page:   Correct or update the Peri Cochin page