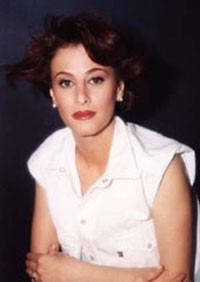 Pascale Sakr was Born in Zahle, Lebanon from Etienne and Alexandra Sakr. Pascale began singing at the age of four.

The Rahbani Brothers influenced pascal sakr by their music and style.

Her professional career started after she met Elias Rahbani by coincidence at a school singing contest.
Pascale Sakr is married to Karl Zacca, Pascale has two children, Alexander and Annabelle.

Pascale got a degree in Law from the Jesuit University in 1987
Her hobbies include, Swimming, listening to music, and going to exotic restaurants.

The 6th Sense and Gladiator are pascale's favourite movies.

Pascale Sakr hates people who lie and she loves Peace.

The Holy Bible is her favorite book.

Pascale Sakr Professional career started in 1981, when Elias Rahbani sent Pascale to Germany at Rostock festival where she won a special prize, with (Oh Babe).

Pascale And Melhem Baraket
She sang many patriotic, classical, religious and love songs that Elias Rahbani composed for her, such as:

Pascale has also worked with Ihssan Mounzer, Charles Chelala, Zaki Nassif and Joseph Khalife amongst others.

Help us improve this page:   Correct or update the Pascale Sakr page