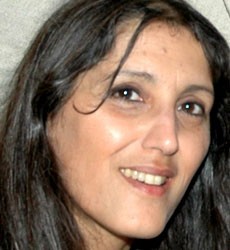 Ogarit Younan is a Lebanese activist, sociologist and author.
She is the founder and head of the Lebanese Association for Civil Rights, and a leader among Arab activists for democracy, human rights, and non-violent conflict resolution

Ogarit Younan (Ugarit Yunan) received her Doctorate in Sociology and Education in 1986, from Sorbonne – Paris, France. Her earlier studies, also in Sociology, were carried out in the Lebanese University, Lebanon.

Ogarit Younan has focused on human society and social behavior through the prism of group formations and social, political, religious, and economic institutions both in Lebanon and the Arab World.

Dr. Ogarit Younan, along with Dr Walid Slaybi, was behind the initiative to abolish the death penalty in Lebanon, and the national campaign for a Lebanese Personal Status Law. She is also a member of the national committee to amend the educational curriculum and unify the civil education book.

Activist Ogarit Younan was awarded the 2006 Pax Christi International Peace Prize for her efforts to promote justice and reconciliation in the Middle East and around the world. She received the awards in Larnaca, Cyprus, from Pax Christi International President and Latin Patriarch of Jerusalem Michel Sabbah, who said she was recognized for her exemplary efforts in fighting injustice and promoting understanding and peace through non-violent means.

Ogarit Younan has been very active in the struggle to end the sectarian regime in Lebanon. She brought forward a set of guidelines that she believes should accompany the latest Lebanese youth movement of 2011 working towards a civil secular state. (See Lebanon Protests)

Ogarit drew the attention of such enthusiasts who raised the slogan of dropping the sectarian system, to the difficulties they will be faced with. She asked them to 'rationalize the revolution', by studying the available alternatives, which may be adopted practically as a pathway for the transition from a Republic of sects to the Republic of citizens, in a peaceful and planned way...To produce a community-based movement with a unified identity and a clear work strategy.

Although she understand the necessity of a more radical street revolution, she still feels for the need to work on purifying the souls of the disease of sectarianism first, such as through a National Education Book. To encourage an upbringing and an education in accordance with the concepts of belonging to the state, not to the communities.
Another alternative, could be to work on producing a Lebanese Personal Status Law .
She also calls for the Purification of the Lebanese Constitution from the materials and concepts that are devoted to Lebanon's sectarian political entity. In this context, Younan had prepared a proposal dating back to 2002 noting phrases, terms or concepts of sectarianism that do not coincide with the building of the Republic of civil democracy. She also called for the formation of a national body to lay the foundations of the State of citizenship.

Help us improve this page:   Correct or update the Ogarit Younan page