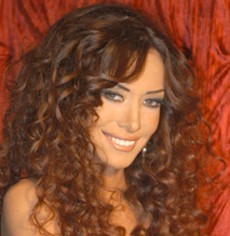 Nisrine Zreik (aka Nisreen Zreik) is a Lebanese model and pop singer.

In the year 2003, Nisrine Zreik was selected as the Second runner up in Miss World Top Model.

Nesrine soon earned her own music and variety TV show on one of the most prestigious TV stations, namely, Rotana TV. Her outgoing character captured the attention of the audience who became loyal to her program Chebbiek Lebbeek.

In the year 2004, Zreik participated in Miss Lebanon which was broadcasted on LBC, a 24/7 live braodcast where the sixteen beauty contestants worked hard to win the title in a reality TV show.

Nesrine was thinking bigger than Miss Lebanon, and as soon as the program was over she started her singing career project.

After the exposure, she decided to go solo and released her debut album in 2005.

Help us improve this page:   Correct or update the Nisrine Zreik page