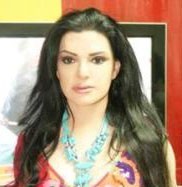 Nidal Al Ahmadieh used to work in al Shabaka Magazine and later created her own magazine which she called Al Jaras Magazine.

Nidal Al Ahmadieh past is filled with lots of problems and controversy with famous singers and actors from Lebanon and the Middle East.

Nidal is known for her strong personality and her harsh pen when it comes to writing articles about the rich and famous.

Nidal Al Ahmadieh style in writing has been known as the Yellow Pen style, which sometimes puts ethics aside and focuses on insulting artists unless an agreement of some sort is reached.

Hayfa Wehbeh was one of the big names which had a major clash in relation to Roula Saad and Nidal Ahmadieh.
A major dispute between Hayfa and Rola Saad was fired because of Nidal, later that year Nidal al Ahmadieh announced that she was threatened by Haifa’s lawyer.

The lawyer added that the program was responsible for spreading rumors about Hayfa and her alleged appearance in a pornographic movie.

Later in the year 2008, famous lebanese singer Najwa Karam filed a law suit against Nidal El Ahmadieh. During the month of august 2008 Nidal El Ahmadieh was put in prison. Nidal was later released after paying a large fine.

During the year 2010, Nidal resigned from Al Jaras TV and a new manager named Jawdat Mallak is currently operating the station.

Help us improve this page:   Correct or update the Nidal Al Ahmadieh page