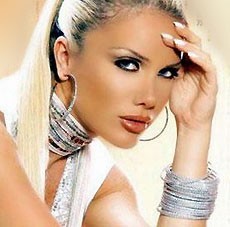 Nicole Saba is a beautiful Lebanese pop singer and actress.

Nicole Saba was born on the 26th of June 1974 in Lebanon. Her full name is Nicole Chaba Elias Saba.

In 2004, Nicole received an award for being the best singer according to a survey done by Sayidati magazine.

Nicole also appeared in another movie called Tamn Dastet Ashrar in the year 2006 and yet in another called Kesit El Hai El Shaaby early 2007.

Her best ablum to date is called Ya Shaghilny.

Help us improve this page:   Correct or update the Nicole Saba page