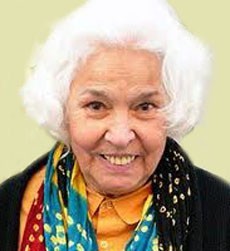 Nawal El Saadawi is an Egyptian feminist writer. She is also an activist and a well-known psychiatrist.

Also known as Nawal El-Sadawy, El Saadawi was born on the 27th of October 1931. In 1955, she graduated as a medical doctor from the University of Cairo.

As a writer, Nawal started writing at an early age; she wrote her first short story back in the year 1957, it was entitled I Learned Love.

Nawal El Saadawi is considered as a leading radical feminist in Egypt and the Arab World. She also strongly opposes the Hijab trend gradually taking over the scene in Egypt.

At the age of 80, Nawal El-Sadawy participated and witnessed the Egyptian Revolution of January 2011 which took place in Tahrir Square and toppled the regime of Hosni Mubarak.

Help us improve this page:   Correct or update the Nawal El Saadawi page