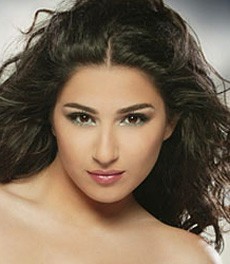 Natasha Sabeh is a teenage singer from Lebanon.

Natasha Sabeh comes from a family of artists, and was born in Jounieh on January the 14th of 1994. At only 12, she recorded her first single ‘Tayr el Fenik’, composed by her dad Jean Sabeh. The lyrics were provided by Nabil Abou Abdo and the music arrangement was done by Walid Abalen . After the positive feedback, Natasha released yet another single called ‘Shagelny Hawak’, composed by Rabih Baroud. Natasha Sabeh was then official on her way to becoming an Arabic pop singer.

Although she is still very young, her style of music is more of a classical romantic Tarab. Many compare her voice to that of famous pop star Nancy Ajram, who also started at a very young age. Will Natasha become the next Nancy? Only time will tell… She should definitely look for someone like JiJi Lamara! Similarly to Nancy, Natasha mostly sings in the Egyptian and Lebanese dialects.

Natasha is currently working under the WID Production label (Saudi-Lebanese company), with Managing Director Mr. Diab Meteed. The marketing and distribution is cared for by music giant Rotana. With them, she has recently launched her first official debut album ‘Natasha 2010’, which features her single ‘Dah Kefaya” (composed by her brother Elia Sabeh).

Natasha Sabeh has also shot a music video clip for her song ‘Baad Bakkir’, with director Rindala Kodeih. It was set in Ashrafieh’s Sioufi Public Garden.

Help us improve this page:   Correct or update the Natasha Sabeh page