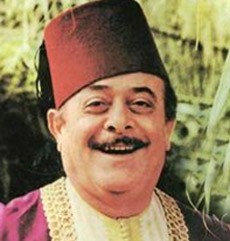 Nasri songs are very famous in the Arab world. He performed in several films and his name was related for many years to the Lebanese singer Fairuz.

His full name is Nasreddine Moustapha Shamesedine, he was born in a small village called Joun, in the southern area of Chouf, in Lebanon.

Nasri Shamseddine spent time in Alexandria and Cairo when he was young, he tried to find jobs in movies. After having no luck in Egypt he moved back to Beirut where he joined a the choir of the Lebanese radio.

In the year 1951 he joined the Rahbani brothers, but left in 1960 to try an establish a solo career for himself.

Shamseddine and Fairuz worked in many plays from 1960 until the Lebanese Civil War in 1978 started.

In the year 1978, He had his last appearance with Fairuz in Petra play.

His last concert with Fairouz was in London in the year 1978, they both sang Dabket Lebnan.

In the year 1983, Nasri suffered from a heart attack before a concert in Damascus was about to start.

Nasri Shamseddine collapsed and died on stage during the performance due to a cardiac arrest which followed the attack.

Help us improve this page:   Correct or update the Nasri Shamseddine page